June 27, 2016
During the 24th week of pregnancy, you have to take a gestational diabetes blood screening from your fingertip and I was terrified because I hate needles and was so worked up over the pain of the finger prick that it was even more devastating when I found out that I failed the screening because it didn't even hurt a bit. And this meant I had to then go on to take the full 3 hours test, which involves the drawing of blood on the hour every hour. This is exactly why you shouldn't stress over something small because it can always get worse. I was much more calm when taking the full test, especially since I was reassured by multiple people that many people fail the screening but pass the actual test.

I was told that I would know I failed if I receive a phone call in three days and I thought I was in the clear since three days passed but on the fourth day, (since Memorial Day is a holiday), I got a phone call towards the end of the day, notifying me that I did fail, which meant the start of pricking myself four times a day to monitor my glucose levels. I was so devastated and upset (I"m sure partially due to my hormones) that I was given the advice to "buy something nice for myself" so I decided I would do just that and decided to splurge on not only the pair of Chloe 'Foster' Suede Wedge Gladiator Sandal that I was eyeing but also anything else that caught my eye, which included the Aquazurra Beverly Hills Suede Lace-Up Suede Sandals, Jeffrey Campbell 'Lindsay' Ankle Strap Sandal, SARTO by Franco Sarto 'Sierra' Block Heel Sandal, Sam Edelman 'Emmie' Open Toe Bootie, Sam Edelman 'Yardley' Sandal, and Sole Society 'Gillian' Gladiator Flat Sandal. This was the most I've shopped in a while and it honestly did feel good to do it and I felt okay since I knew I wouldn't keep them all (or so I hoped). I didn't take any photos of the Chloe 'Foster' Suede Wedge Gladiator Sandal,the Sam Edelman 'Emmie' Open Toe Bootie, or the Sole Society 'Gillian' Gladiator Flat Sandal because they looked so bad on me (only the Sam Edelman wasn't too big fit-wise) but here are quick snaps of the others:

As predicted (and a bit relieved), I ended up only liking and keeping the Sam Edelman 'Yardley' in both the Black and Python because they are so comfortable and super cute.

The size 4 was too small for me and the size 5 a bit big but since I couldn't find a 4.5 available anywhere and liked them so much, I kept the 5, which isn't uncomfortably big in any way and doesn't affect the comfort of it at all, most likely do to the adjustable lace-ups. After all of this, I am an even bigger fan of Sam Edelman now since they fit well and are comfy, which is so important to me now.

So now that I've shared this one bit of unfortunate news that led to this shoe binge, I do want to touch on a few other pregnancy issues I've had - and I have to say that I didn't experience any morning sickness so I consider myself to be very lucky already:

1. Pain in the pelvic area - I had actually self-diagnosed myself with a hernia after my doctor dismissed the pain I described as normal but it just got worse over time. I was so anxious about it at my next appointment that I insisted she check it out and told her what I thought but embarrassingly enough, it was not a hernia and the reason for the pain is because the baby's head is putting pressure on my pelvic bone. Luckily, it's not constant pain but the pain occurs quite often, especially when I go from sitting to standing and it's also super swollen most of the time too, which I just have to deal with until the end of the pregnancy (this started around the third trimester so I was pretty much coasting through until then).

2. Leg cramps - I get super crayz leg cramps in the middle of the night that just leave me yelling in the middle of my sleep. I found out it's probably due to dehydration since I don't drink enough water but could also be that I don't get enough potassium or calcium so I'm trying to drink more water throughout the day. I'm ashamed that I can barely get four cups down a day.

3. I really miss being active now that it's so warm out. I accompanied A to the park the other day to play handball and I was a bit bummed I had to sit out so I can't wait to be able to play again next year. 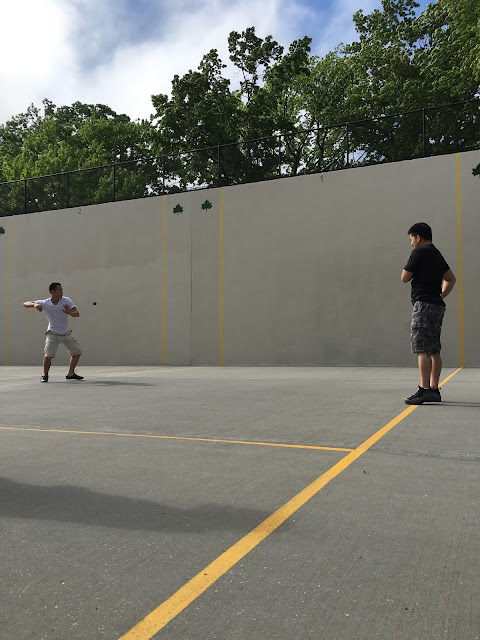 4. Lastly, it would be the finger pricking that I now have to do everyday, four times a day, as a result of having gestational diabetes. I do think I am just borderline since all my scores are quite consistently low so I'm hoping I can taper off after another month of doing this. When I first started pricking myself, I really didn't think I could do it everyday - and I really feel for the diabetics out there - I deeply admire those who are because I find it so hard for me to do this already - I can't imagine going through this more often and having to take insulin as well. Monitoring my blood sugar levels also entails following a stricter diet so I've cut out sweets and eat less carbs, which includes eating much less fruit, pizza, and (my beloved) potatoes. I'm normally not a huge fan of sweets but I already have a list going of things I want to eat once this is all over. The nurse did say that it should go away after the pregnancy but that I'm at risk for diabetes later on in life so this does give me motivation to continue to try to eat healthier from now on.

Leaving you with the quote of the day, "Obstacles don't have to stop you. If you run into a wall, don't turn around and give up. Figure out how to climb it, go through it, or work around it." -Michael Jordan